And here’s where it starts to get weird… 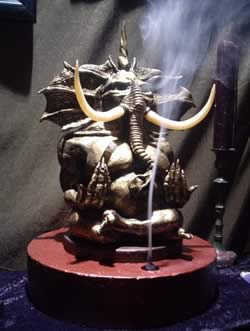 The weak beams of their electric lanterns darted along the rough walls. The three enlisted men crossed one narrow stone bridge and then another as they explored the expansive main chamber. They signaled to us each time they located a passageway leading away from it. I signaled back with my hand-powered flashlight, while Minh plotted the archways on the map he’d started.

They’d found a total of five possible egresses from the central cavern. Wait, no, six, I reminded myself. The lieutenant had forgotten to include the stairway leading back to the surface temple, until I pointed it out to him. Based on the sketch map, I expected two more passageways to be discovered.

Here at the feet of an alien god, according to the map, we sat at the hub of a wheel of dharma. Minh would have noticed it too, but the atheistic Communist Party cheerleader could see nothing beyond the material plane. Were we being judged? Or had our guilt been established before any of us set foot in this sacred place?

In short order, the sergeant located a collapsed corridor to the southwest, while Hien and Quan identified an archway along the western wall. A waterfall had helped to conceal it from afar. Water trickled down from the skylight in the ceiling of the cave and pooled in a shallow cistern below the drip line of the waterfall. The overflow ran through a narrow aqueduct. It fed another shallow basin in the shape of an open clamshell.

The elephant god’s dais sat in the center of this water-filled basin. Upon closer inspection, I realized its lower appendages were not legs at all. One tentacle overlaid another in a twisted approximation of the lotus position. They wound around the base of the corpulent statue like serpents before trailing downward into the water.

Four of the seven passageways turned out to be safe. Two of the remainder tapered to rubble strewn dead ends within meters, and the staircase was no kind of way out of here. Minh decided we’d rest and then seek the right path. But we all agreed not to tarry too long. No one wanted to starve, much less consider the grisly alternatives.

The waterfall feeding the pools provided fresh water, so dehydration was not an immediate threat. Despite a metallic tang, like rust on the tongue, the water seemed safe enough. It did not kill us or make us shit ourselves while exploring the meandering corridors under the mountain. As our sole water source, however, it limited our ability to travel beyond the main room for extended periods.

My dead lover manifested on a regular basis after we started trying to find our way clear of the temple complex. Though no one else seemed to see or hear Lien, I tried and failed to convince myself that she was my guilty conscience or a specter of the mind’s eye, a byproduct of shock, concussion, and exhaustion.

Wandering the winding corridors one after another, Thanh led us deeper into the heart of Hui Bah Noa. As we passed mural after mural carved into the walls, he spoke of Ganesha, Shiva, and his wife Kali. He told us how the gods of the Cham had warred with demons from the stars in a previous cycle of ages, when man existed in a state of barbarism. The victorious gods had sealed the demons in cities beneath the sea.

Lien would smile in her bemused way, like the first time I saw her slit a grown man’s throat, and shake her head. Then she would explain to me a bit more about the true gods, the Great Old Ones, and how the statue on the dais, Chaugnar Faugn, represented an entity older than the Cham and even their Hindu gods. Ganesha represented a later benevolent interpretation of this bloodthirsty being from beyond the stars.

Confounded by another collapsed corridor, we backtracked to the main chamber and set up camp. The sun had passed overhead hours ago, and the wan light of late afternoon filtered down from the domed ceiling. It draped the bloated statue in long shadows, giving it an even more sinister appearance.

I slept but did not rest. My fever dreams became nightmares. Lien and I wandered alone along the corridors. She led me through dark passages by one ice cold hand, but we ended up back to the main chamber. Even in the dreamscape, I could not escape the Temple of Chaugnar Faugn.

Lien danced for me here, slow and sensual, before making love to me in the pool at the base of the statue. As I neared climax, she transformed into the being on the dais and wrapped her tentacles around me. Her lips and tongue became the engorged trunk of the beast. The monster forced itself inside my mouth before I could scream. I felt the end of the invasive appendage uncoiling, expanding in my throat. And then I came.

I awoke crying and shaking, ashamed of the sticky mess in my trousers. Crawling to the base of the pool, I lapped at the brackish water before realizing what I was doing. I sputtered and fell back on my haunches.

The statue loomed over me, bathed in the early light of dawn. It appeared to be smiling broader than before, but something else seemed different. As my vision cleared, I could see that someone had removed the dagger with the ruby pommel from its chest. Apparently, the thief had pilfered the smaller blood rubies too. All that remained was a star-shaped scar on a bare white bosom.

I tried to stand but lost my balance when my hand hit something sticky yet slippery on the floor. I landed on one of my comrades and sputtered an apology. When no one responded, I rolled over to find out who I’d disturbed.

I came face to face with dead-eyed Hien. His throat had been slit with the precision of a surgeon; blood had covered his chest before pooling on the floor around him. Judging by his warmth, he hadn’t been dead long.

My screams brought Thanh and Minh to my side, but I saw no sign of Quan or his gear. I forced myself not to be sick as the implications became clear. When one looked beneath the surface, they were dire indeed.

“Looks like Mr. Tough Guy filled his pockets,” Thanh explained. “Too bad Clown Shoes woke up and had to be silenced. Guess Quan didn’t want to leave any witnesses.”

The lieutenant nodded in agreement. But Lien stood behind Thanh, shaking her head again. I had to agree; the sergeant’s story stunk worse than a fish market on a hot day. To an outsider, his neat explanation made sense. But I knew both of those men. And they knew each other.

“That’s plausible enough,” I said, “unless you know they’d been neighbors most of their lives. Or that Hien had married Quan’s sister last year. If greed had blinded Quan enough to kill his brother-in-law, why would he leave us alive? One burst from his rifle, and there are no loose ends.”

Thanh didn’t answer. Instead, he stared at the statue, rolling a cigarette from a battered tin of tobacco. My tired eyes tracked from lingering Lien to the statue to the scout sergeant. His trench lighter flared brightly when he lit his cigarette. The glow of the firelight danced across the embroidered elephant logo.

What my mind had not been able to correlate before came together with the clarity of a puzzle missing a few key pieces. Between Lien and Thanh, they would provide them. I’d make sure of it or die trying. I’d had enough of lies.

“Don’t tell me what to do,” I muttered. “I know he’s a liar. I don’t need to know about his hat to know he’s been leading us in circles for days, until we’re too weak to do anything about it.” I shouted, “But what is it? Answer me, goddammit! Are we supposed to be sacrifices to that thing? Did you sacrifice Hien? Quan too?”

All eyes were on me then. Everyone stared at the ranting lunatic, the corporal who’d been speaking with the unquiet dead. But I hadn’t cracked; I had come to a conclusion. The man who’d led us here had a sinister hidden agenda. And I was right.

This story was written by Jeremy Hicks. It is his original content and cannot be used anywhere else without his expressed written consent. However, this blog may be shared, reblogged, etc. on social media for the purposes of promoting the author, his blog, and his other creative works.

Any resemblance to persons living or dead, events real or imagined, etc. is entirely intentional. This is a work of fiction but draws on real events and references the real world at times. Any reference, product placement, or pop culture quote is not intended to impinge on any trademark, patent, and/or copyright; rather it is flavor text for the dialogue of characters raised within the context of our pop culture.

If you don’t like these terms of agreement, go check yourself. You’re complaining about a #FREE story.