Little did our subject, author/editor/artisan Logan L. Masterson, realize that he’d become the topic of the afternoon, even before arriving for his interview. During our usual ritual of in depth conversation over the chaos of Call of Duty, my brother Joshua and I had been discussing our own personal experiences with the weird and wild denizens of Ravencroft Springs. This fictional town, the epicenter of Masterson’s novella of the same name, recently released by Pro Se Press, hit close to home for us.

My brother and I grew up on a farm on the edge of a creepy little town nestled in the foothills of the Appalachians, one caught in a cycle of crime, grime, and decay similar to Masterson’s Ravencroft Springs. There are even mysterious murders, missing persons, and mouldering rows of millhouses. As a result, the old mining town portrayed in Masterson’s novella came alive for us. It easily becomes a believable centerpiece for the grim events that unfold in this brief, fast-moving tale of unlikely lovers doomed by abyssal, otherworldly creatures and their murderous cultists, common enough tropes in Lovecraftian horror that are utilized quite well in this Southern gothic story. 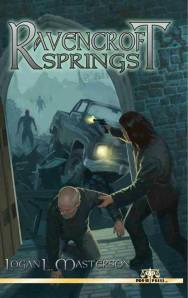 With Masterson’s easy, flowing prose and the conversational tone of its narrator, Ravencroft Springs feels like an even faster read, which is a shame, because it left us wanting more. More of the smart, determined protagonist. More of the deranged, deformed townies. And more beings from the Cthulhu Mythos. So, you can bet we hope to read more tales of terror set in Ravencroft Springs soon. We’re sure that you will too after reading it.

As for its creator, I met Logan Masterson after he edited my short story submission for Capes and Clockwork, a Dark Oak Press anthology featuring stories about superheroes in the age of steam. He is also the author of one of the entries in this collection of steampunk superhero stories. Mr. Masterson also served as editor on the Pulpology anthology; however, he was not one of the contributors for that collection. After nearly a year on the hectic convention circuit and working on our individual projects, I finally had a chance to sit Logan down and ask him about his writing, editing, and other projects. Let’s hope you enjoy his answers as much as I did.

I’ve been writing fiction formally since I was a teenager, some twenty-five years ago. I took it up seriously, along with poetry, way back in high school. There was a long hiatus there, but I’m back in the saddle and giving it a real go now.

I love all the speculative genres, but my real calling is probably fantasy. I love world-building and epic adventure so very much that anything else I write becomes fantasy in some sense anyway.

The novella is probably the perfect form for me. Its length allows for plenty of development and a subplot or two without begging for filler. Writing short stories is really rough, especially at the common 7,000 word limit. Novels are also difficult, since they demand a tremendous amount of content that must be lovingly curated. The fantasy novel is even tougher: it’s easy to fill a book with unnecessary background, action and detail.

If I had to pick a handful, they would be Tolkien, Dickens, Raymond E. Feist, Neil Gaiman, and lately Alex Bledsoe, especially his Tufa novels.

As a writer, are there common themes or tropes that you prefer to use in your work?

The tropes really depend on the genre, but the themes are pretty much the same throughout. Humanity is my theme. The strengths and weaknesses that make us what we are: love, hate, tradition, fear; these are the internals. Externally, humanity is culture, war, greed, nobility, and a thousand more facets of a great dusky jewel.

Where do you find inspiration for your writing?

Inspiration is everywhere. Everywhere! I find ideas in comic books, TV shows, the news, personal anecdotes, just all over the place. Combining elements, working ideas together and hammering them into something newish, that’s the tricky bit.

The Lord of the Rings. I’ve read it more than a dozen times. It’s epic and personal, the scion of fantasy, but shot through with tremendous horror. Tolkien’s prose is incredible in places, and his descriptions are comfortable and evocative enough to make a reader feel like he’d actually been there. I also revisit Shakespeare and Dickens every once in a while, to touch the very avatars of character and structure respectively. 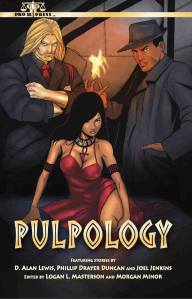 As far as your own work goes, what are you working on currently?

I have several projects on the go just now, all at various stages. The first sequel to Ravencroft Springs is forming up nicely in my head. Meanwhile, I’m getting words down on a new series of fantasy short(ish) stories about three postulant priestesses. An epic fantasy continues to slow roast on the back burner, if I can slant-mix a metaphor.

Will there be a sequel to Ravencroft Springs? If so, what can you tell us about it?

I can’t say much, really, but I’ll give you this: Ravencroft Springs is the first installment in a Supernatural Southern Gothic trilogy. Since the tropes of supernatural horror are crystal clear, I thought I’d muddy the waters a bit by adding elements of the southern gothic, a genre steeping in history and mystery.

What will be coming out next for you?

I have a couple of finished stories in different stages of submission right now, so I’m not sure what will come first. There’s a prequel to Ravencroft Springs out there, and a sequel to my Prime Movers story in Capes & Clockwork. I’ll be sure to let you know when “The Feast of Love” and “The Ecuadorian Adventure” come out.

Where will you be making your next public appearance to promote your work?

My next scheduled event right now is Killer Nashville, a great crime and mystery conference here in town on August 21-24. It’s a great event, with a staged crime scene contest, lots of amazing panels, and terrific guests. After that, I’ll be at Imaginarium in September, a new convention in Louisville, and at the Southern Festival of Books here in Nashville in October.

Find out more about Logan L. Masterson and his creative endeavors at the following link: http://agonyzer.com/