When I’m not writing or procrastinating, I am an archaeologist by trade. I’ve worked for a number of companies all over the Southeast and Mid-Atlantic region; most recently, I’ve been employed by Louis Berger, a major infrastructure company with offices in dozens of countries around the world. This job brought me into contact with another archaeologist who spends his nights turning his fevered thoughts into fiction. This gentleman with the mad muttonchops, Paul Stansfield, is a veteran field archaeologist, a serious sports enthusiast, a top-notch beer pong partner, and a good friend.

This Rutgers graduate and diehard fan is also a talented horror writer. In fact, the first story he told me about features overzealous camper kids who mistake the actors in a low budget zombie film for real undead. When I heard that pitch on the slow, sleepy ride to work in the Ocoee River Basin of Tennessee, I knew I’d have to read it. And maybe one day, I could talk Paul into letting me turn it into a screenplay. For now, I’ll settle for an interview with this new face in horror fiction.

Somewhere I still have an incomplete science fiction-ish story based on my Legos that I wrote when I was about 10. I completed my first stories at about age 14 or 15. But I really started writing in earnest, and submitting, in my mid 20’s, so it’s been about 20 years total. Horror is my strong genre preference. Some of my stories are hybrids, say action/horror, fantasy/horror, or scifi/horror, but they’re usually at least horror-related in some form.

I don’t have a preference here. I come up with the story idea, and take it as far as it goes. My output has been mostly short stories, but I have written a few novellas, and three novels that I’m still shopping around.

Yes, many. Basically if I really like a novel (or nonfiction book), I’ll almost always reread it, occasionally many times. Obviously I don’t usually forget the major plot points, but I do forget some minor ones, so it’s still entertaining and thought-provoking the second, third, etc. time around. Some examples would be King’s “The Shining,” Scott Smith’s “A Simple Plan,” Thomas Berger’s “Little Big Man,” Frank Herbert’s “Dune,” and William Peter Blatty’s “The Exorcist.” 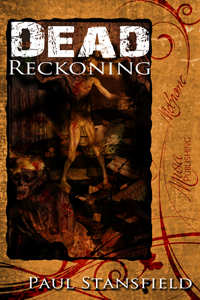 As a writer, are there common themes or topics that you like to explore?

I don’t intentionally set out to do so—I usually just come up with the story idea and start writing. But looking back, I do see some common themes and topics. Obsession, frustration, guilt (and I’m not even Catholic!), greed, revenge, and finding one’s self, to name a few. Also a fair bit of “body horror” explorations.

Where do you find inspiration for your writing, especially your newest release?

From many things. From movies (“Pink Flamingos,” “Indiana Jones and the Temple of Doom”), books (the folklore encyclopedias called “Man, Myth, and Magic”), real life events (the Winchester House, Genghis Khan, various serial killers, seeing calves’ brains for sale in an Iowa supermarket), and even an educational filmstrip called “Hemo the Magnificent.” For my latest, “Unholy Spirit,” the inspiration was Dalton Trumbo’s great anti-war novel, “Johnny Got His Gun.”

I don’t want to get us in trouble with our bosses here, but during your day job as an archaeologist, do you find yourself creating plotlines in your head or working out story problems as you survey an area or excavate a test unit?

No, not really. Most often, solutions to story problems occur to me while I’m driving, taking a long walk, in the shower, or when I’m falling asleep. Maybe at work I’m too distracted by the ticks, poison ivy, venomous snakes, and even the rare rabid fox! 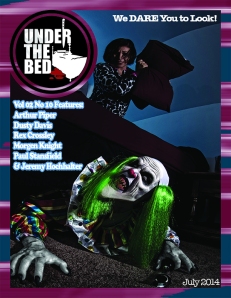 What can you tell us about your newest release? And where can we find it?

I wrote “Unholy Spirit” right after finishing a novel length manuscript in which the main character was good, and stricken with terrible guilt. So it was a nice change of pace, and quite fun, to write about an unrepentantly evil character like Keisha Cartwright. It was also a cool compliment to hear from a prior magazine editor that this story had freaked out his staff! This story is out in the current issue (July, Volume 2, No. 10) of “Under the Bed” Magazine. The site address is: http://www.fictionmagazines.com. And more information on the story is included below.

Finally, where can we find out more about you and your other works of fiction?

My blog address is: http://paulstansfield.blogspot.com , where I talk about writing, sports, underrated movies and books, random thoughts, and mostly, weird and gross foods I’ve eaten. My two ebooks (“Dead Reckoning” and “Kaishaku”) can be found at Musa Publishing (www.musapublishing.com). I also have a story (“Responsibility”) in Sunbury Press’s “Undead Living” anthology, which can be found at: http://www.sunburypress.com

Thanks for taking the time to answer my questions and tell the readers here more about your work. I look forward to reading all of it. Keep on disturbing publishers and editors and hopefully one day you’ll be scaring the hell out of millions of readers around the world.