I’m not much of a blogger or self-promoter for that matter. I find it easier and derive more joy from promoting the works of others. That being said, I was talked into participating in a blog tour about the writing processes of different authors. I tend to field similar questions at conventions or whenever someone finds out I’m a writer.

Before we get into the question-and-answer portion, I would like to thank A.G. Porter, the talented, alluring author of The Darkness Trilogy, a series of YA Paranormal Thrillers. She brought me onto the tour.

You can find out more about her and her works at the following links:

In this installment of the Writing Process Blog Tour, you’re getting a sneak peak into the world of a writer who likes to write horror, fantasy, and speculative fiction. Namely, me! Good luck! Hope you come out with as many sanity points as you had going into this blog. If you don’t blame A.G., not me. 3:)~

What am I working on?

At the moment, I am working on a number of short submission projects for various anthologies with a few different publishers. I finished the rough draft of a submission for Chaosium’s The Summer of Lovecraft anthology, which features Cthulhu Mythos stories set in the 1960s. However, I ran long, so I had to edit it down a couple of thousand words before the deadline. Thankfully, several beta readers helped me through that difficult process. I’m in the planning stages for a hardboiled detective short story for Dark Oak Press. And have a couple of other short stories in various stages of completion for upcoming Pro Se Press projects.

How does my work differ from others of its genre?

Hmm…good question. I’m assuming that other people are being read more than me. My career as a professional fiction writer is just getting started, so I’m working on developing my style, playing with characters and different narrator voices, and experimenting with different genres. In doing so, I produced a truly unique piece of steampunk fiction set on our fantasy world of Faltyr. It’s a story about dwarves on a submarine deep within the abyssal seas contained within the planet. I tried to handle the steam technology in a different way and fused much of it with our Aethyr magic system.

Why do I write what I do?

Various reasons. It depends on what I’m writing actually. I’ve written stories to expression emotions, viewpoints, beliefs, conflicts, or tackle touchy or controversial subjects. I’ve written strictly to entertain and have fun with it too. So, what I’m writing at the time is really influenced by my mood and what scenes my imagination station is developing at the time. However, most of my work tends to be darker, grittier pieces as I tend to have a very pragmatic outlook on many subjects and have highly critical viewpoints on other topics. I also tend to live by the phrase: hope for the best; prepare for the worst. So, that mindset tends to influence the tone of a lot of my work. And then there’s the revenge fiction. Muwahahaha! One of those will be coming soon in Dark Oak Press’s werewolf anthology, Luna’s Children: Full Moon Mayhem.

How does my writing process work?

Well, first there’s the concept or initial idea. Followed by a flurry of activity, which is mostly planning and research. Then there’s the procrastination. And the hem-hawing, the paralysis-by-analysis, and finally some forward progression. More procrastination aids in the percolation process for imagination station. Occasionally, there’s some advice from outside sources along the way. Then I wrestle with Act II. Hate myself and my writing. Procrastinate some more. Get frustrated. Maybe have a smoke to relax and then go back to writing. Finish the third act, usually well above the anticipated word count and then move onto editing. But not before I criticize, procrastinate, and proofread. After I’m done editing, some other poor bastard beta-reads it and then unloads on me with both barrels. I fume. Mostly, I think things like: Why does everyone hate adverbs anyway? And adjectives, don’t I need those? I sulk and then procrastinate. Then I edit some more. Eventually, it goes to a professional editor before coming back to me. We send it back and forth like a game of pong, only less fun, until the publisher is happy. Some months down the road a check shows up in my mailbox or I get some free copies or both. And there you have it. The guide to being a very poor professional writer. 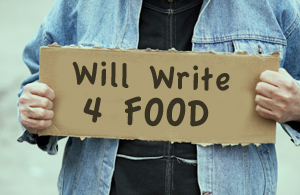 Well, there you go, kiddies. That’s how the magic happens, from its origins in imagination station to publication. If you feel enlightened and/or educated, I have succeeded. If you feel slightly traumatized, I have succeeded better than I could have possibly imagined. If you have any other questions about the writing process or need help with yours, feel free to look me up on social media or chat with me at a convention or booksigning.

In the meantime, check out my newest release, a Pro Se Digital Single Shot entitled “The Savior of Istara”, another standalone tale from The Cycle of Ages Saga. It’s only 99 CENTS on Kindle and Smashwords. Click the picture below to purchase it through Amazon. 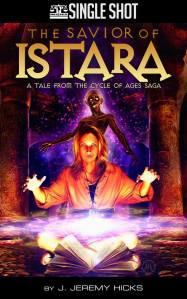 As part of this Writing Process Blog Tour, I am supposed to tag three more people with this blog and provide links to their material. Coming up on this blog tour, you can look forward to the following authors: 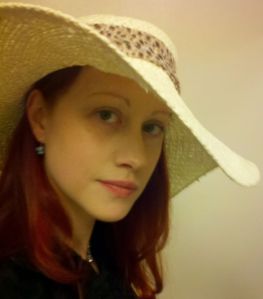 HC Playa is a writer, a mad scientist in training (translation: full –time graduate student), a mother of three, and an animal wrangler. Although, some days she wonders if maybe she’s the one being wrangled.
An avid reader since the precocious age of four, she devoured books from numerous genres, but science fiction and fantasy hold a special place in her heart. A rambling, late night phone conversation with her sister sparked an idea, which led to discovering a new passion. Bitten by the writing bug, at last count she had seven novels in various stages of completion, and a growing collection of short stories.

Her favorite activity is to play in fantastical worlds, as it’s the best adventure there is.

John A. McColley lives in a vortex of worlds, characters, machines and language, constantly dragging images and forms out of the storm onto canvas, paper or computer screen to share them with others and give them new life. When not wrestling with words, he cranks dials and makes sparks at his local hackerspaces and searches the wilds of New England for semi-precious stones with his wife and son. His work is currently available in Crossed Genres’ first issue of the year, various anthologies, including the first Capes and Clockwork, and at Mad Scientist Journal.

J. H. Fleming is the author of the upcoming Lifting the Veil: Tales of Discovery and Magic. Her work has been published by Visionary Tongue Magazine, Evil Girlfriend Media, Mocha Memoirs Press, and Seventh Star Press. She writes fantasy that isn’t afraid venture into the shadows. When she isn’t writing, you can usually find her with her nose in a book, or possibly playing a video game or watching anime. J. H. lives in Arkansas with a Yorkie, a cat, two turtles, and her Asian American friend with a voice to rival an anime character’s.